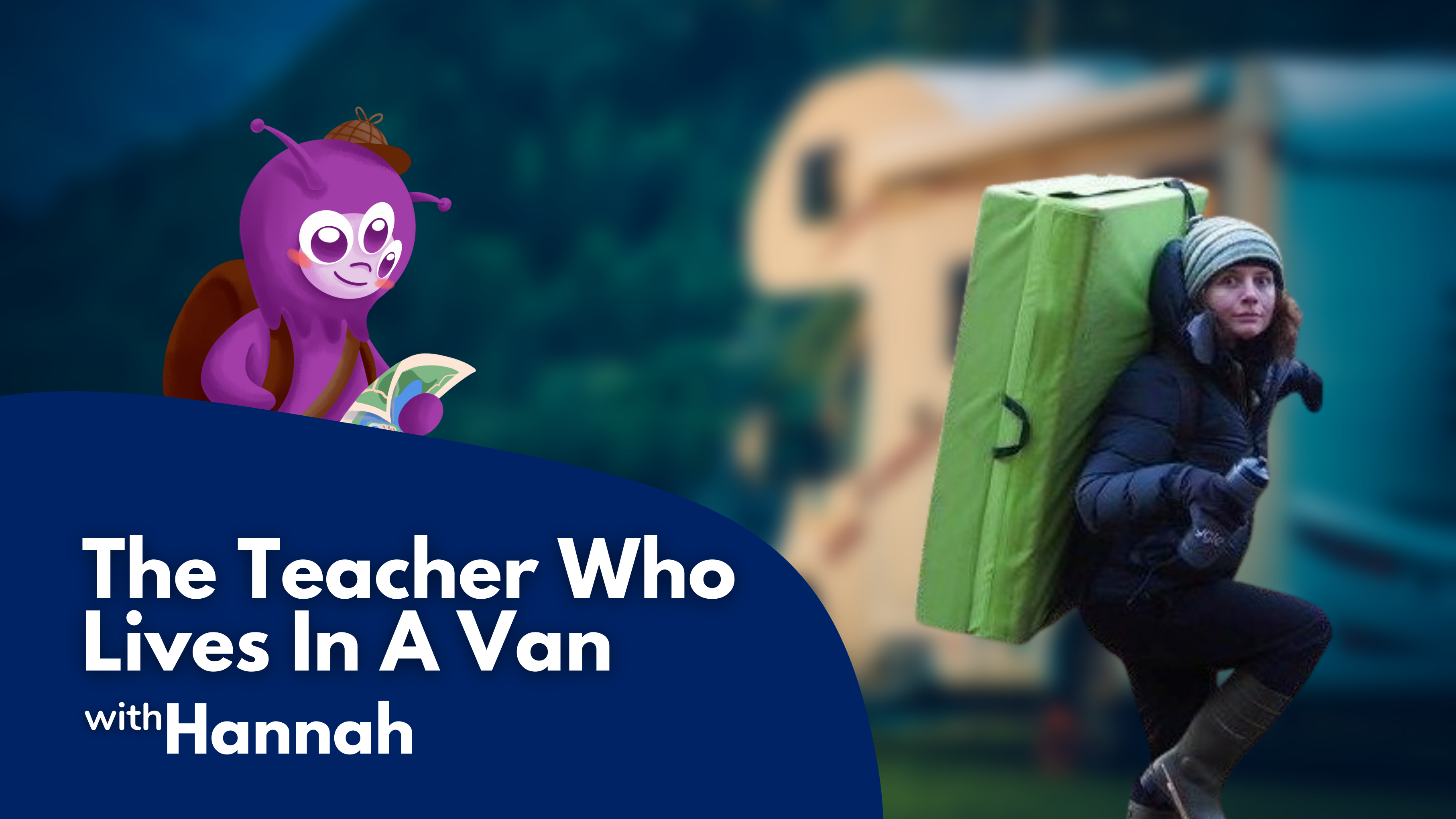 These are show notes taken from Episode #8 of our podcast: The Teacher Who Lives In A Van. Have a listen to the full audio podcast here.

Syd had a chat with Hannah, our perky and adventurous Science teacher. They talked about the many possibilities of a flexible online education and how this lifestyle can also work for many families.

Hannah has been with us since last year. Hannah travels around Europe and the world – she literally lives in a van! Her life is centered around her passion for traveling and doing the things she loves. Her story shows us the fascinating life that people can have once they commit to an online world, with its flexibility allowing them to travel and do things which they cannot otherwise do if they’re restricted in particular locations. It’s an exciting lifestyle, as who would have imagined 20 years ago that this is an option, back when the internet did not yet exist the way it does now? 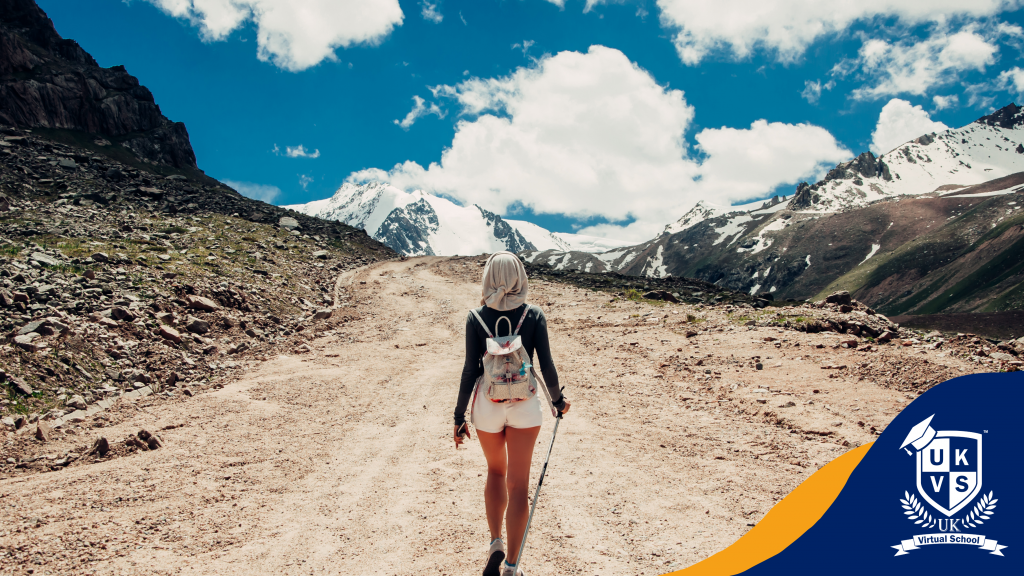 Hannah is a free-spirited adventurer who would not let anything stop her from going places!

I am originally from New Zealand. New Zealanders, in general, we’re a bit of a travel bug. We like to move around as much as possible. Pretty much any country in the world you’ll go to, there will be at least one New Zealander! So I was originally a marine biologist and then I switched to teaching when I decided I wanted to move more into environmental education. When I was doing environmental education, I was living all over the world. I lived in Madagascar, I worked in Scotland, New Zealand, and other parts of Europe. Then I retrained as a teacher – lived in London and worked in Slough for a couple of years. Slough has its charms, but it’s not quite the same as being able to travel. So I moved to Europe to travel. My partner and I moved into our van. I love teaching, I think it’s a great profession! I love being able to work with kids, but I also really like being able to go and do all of my outdoorsy stuff. I like scuba diving and skiing. And I’ve just taken up paragliding. UKVS allows me to do all of those things and bring those into the classroom as well, which is really fun. 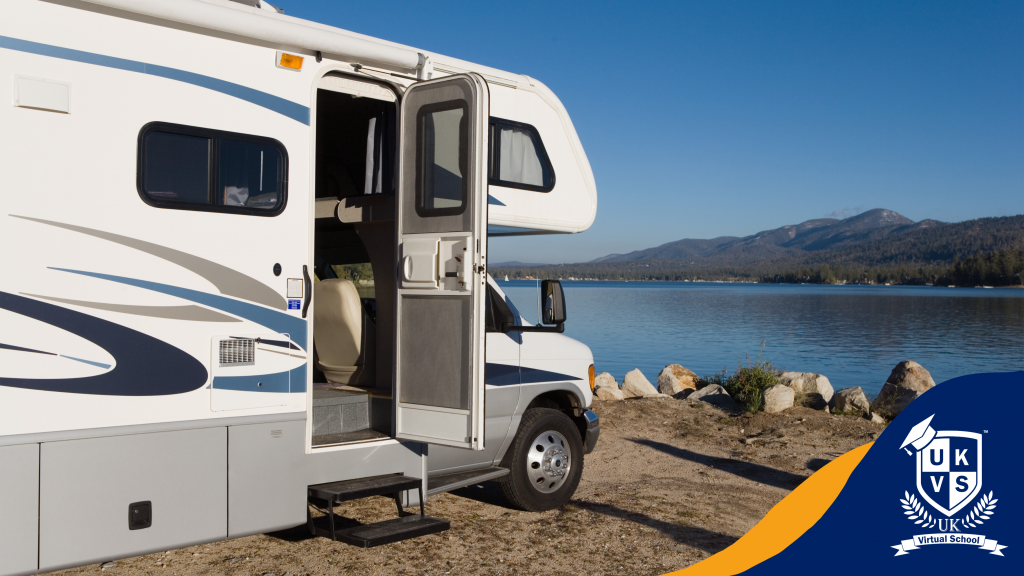 How exciting must it be to live in a van?

We bought this van two years ago. We’d been thinking about living in a van for quite a while. In New Zealand, it’s quite common to have people traveling around the country whilst living in a van for a long period of time. But with work, it was never really an option. My partner is a software engineer so he was tied to an office, he needed a good internet connection. Obviously, I was tied to a classroom. We decided that we were going to quit our jobs and go traveling for a year or two in a van around Europe and then move back to New Zealand.  And then the pandemic happened.

Over the first lockdown, we were building out the van. It’s always been a plan that we’d live in the van and that we’re traveling, that maybe I wouldn’t teach for a year or two. That would just be one of the sacrifices I would make in order to do the things I love. Then the pandemic happened and the opportunities for remote teaching cropped up. After living in the van for a couple of months, I was starting to get a bit bored. My partner was working normal hours and I was sort of sitting there going, “Yep, there’s only so much planning I can do and where to buy the next great meal!” I started looking into remote teaching jobs. 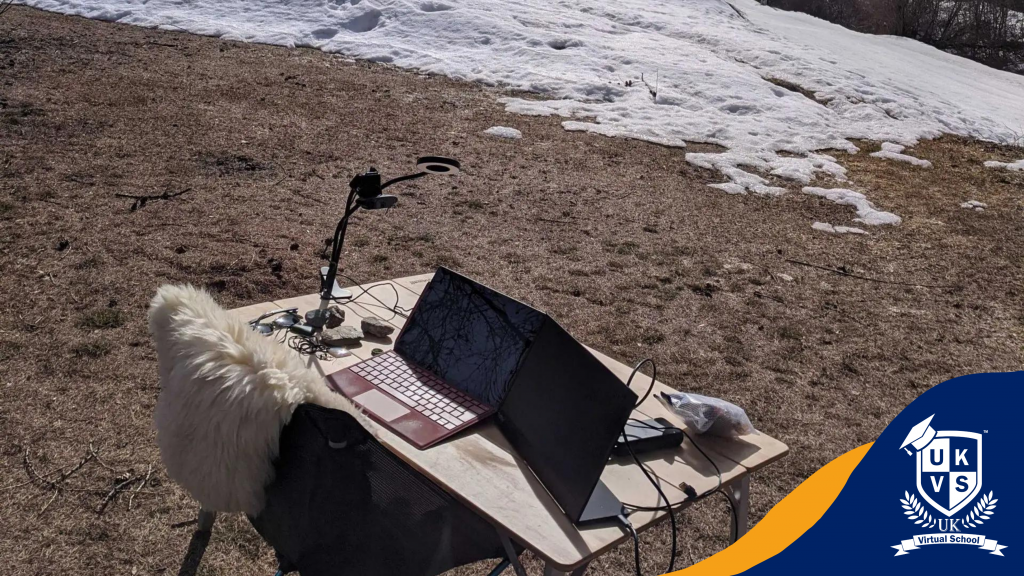 Hannah’s COOL outdoor setup at the Swiss Alps whilst teaching.

This is what’s really fascinating – we’ve seen some of Hannah’s lessons where she’s got the backdrop of the Swiss Alps behind her. The actual Swiss Alps. She’s set up outside where there’s almost no human contact, with goats and cows and animals roaming about. How did the kids find this aspect?

Kids are always going to be the most accepting of everything, right? They’re usually pretty open to new ideas and they find it really interesting or a bit strange. I’ve found that they’re pretty open to the world and open to different ways of thinking. Usually if I know I’m going to be somewhere interesting, relating loosely to a topic I might be teaching, I try to integrate that somehow. 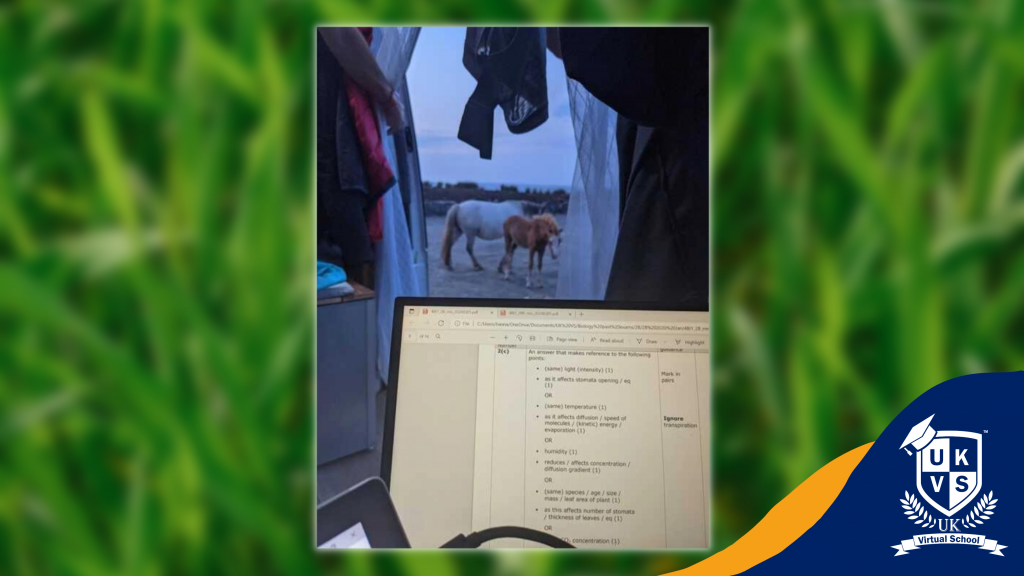 When I was teaching Year 10 about ecology and doing ecosystem assessments for iGCSEs, I knew that it works far better if you’re somewhere, like in a woodland. I walked around with my computer going, “Hey guys, this is a tree and then we looked at all of the interactions going on in that tree.” So if there’s something interesting going on, I try to integrate it because it’s always interesting to see the rest of the world from wherever you are, especially at the moment when everyone’s kind of stuck in one place. It’s nice to be able to be like, “Hey, guys, remember these other places exist?”

What’s really exciting is that we can engage the kids at that level of interaction. And we don’t give kids enough credit for how well they’re able to adapt quickly. Just look at how the kids have adapted under the pandemic. How did Hannah come to terms with being at a point where she feels comfortable to leave things behind and travel? 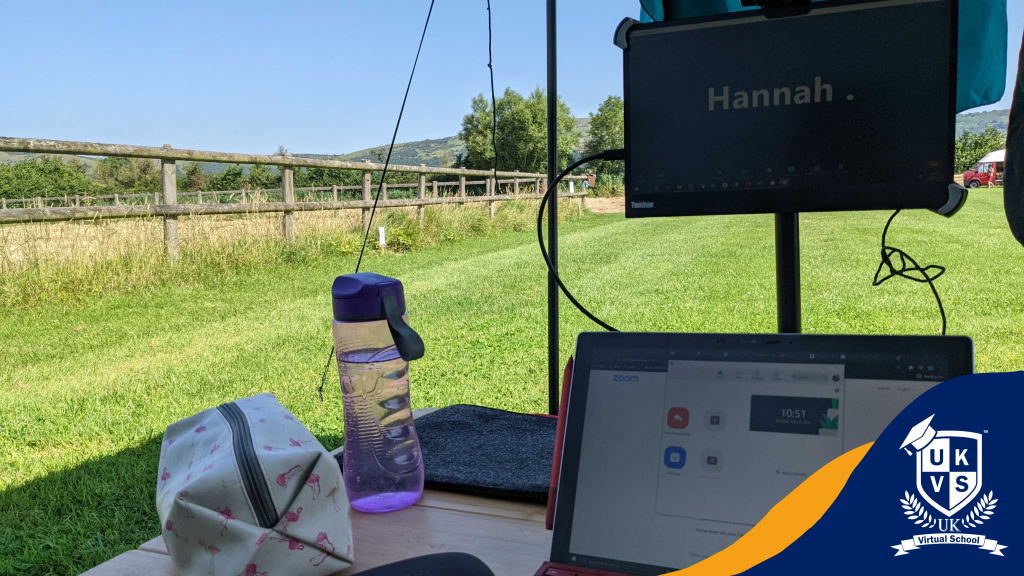 Hannah has found a community at UK Virtual School.

When I was growing up, my dad was constantly traveling for work. He’s a cameraman. And so at this point, he’s been to 97 odd countries. When I was little, we used to travel with him and as I grew up, at 16, my parents moved to the other end of the country. And I sort of stayed where I was. I was already a bit on my own and having to sort of find my way. I would go off and do things on my own. So I went and lived in Madagascar for a year and I did my Master’s in Fiji. I was already quite comfortable with being uncomfortable. When I moved into the van, I didn’t really think about the negative sides of it. But having been here for a while, I realized the importance of having a community, which I think UKVS really provides.

Podcasts are accessible to many families due to the number of platforms hosting them – and you don’t have to be enrolled to listen and be able to relate! The content covered is just as much of a learning journey to everyone. The UK Virtual School podcast plays a key part in our journey to an education revolution. Hosted by our founder Syd, the series covers a plethora of topics about changing the landscape of home education – the UKVS ethos, tips and guides for parents, shifting mindsets, interviews with actual parents and teachers, and many more! Listen to the series and episodes here.